The NDIA Rocky Mountain Chapter has established the Patriot Award, a recognition program. The Patriot Award is designed to recognize exceptional Americans in service to their country who have demonstrated a profound and abiding love of country and whose inspirational leadership, actions, and selfless dedication symbolize our nation’s ideals, values, and founding principles. The award is intended for U.S. military personnel in the enlisted grades, company grade officers, warrant officers, government civilians, and Air Force Academy cadets.

The recognition is focused on military personnel stationed in the Colorado Springs area representing the major military organizations and bases. This year the chapter will recognize personnel from the Air Force Academy, Space & Missile Defense Command, Air Force Space Command, NORAD/NORTHCOM, and members of the various units stationed at Fort Carson. Additional organizations may be added in the future. 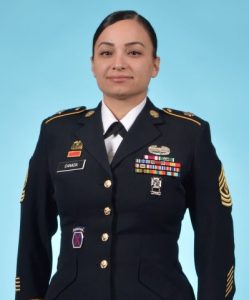 1st Sergeant (1SG) Edith A. Canada manages daily operations of Headquarters and Headquarters Company (HHC), U.S. Army Garrison (USAG), and the Replacement Center at Fort Carson. She is responsible for the health, welfare and readiness for 180 soldiers; directly supervises 13 Platoon Sergeants and 10 primary staff members; works alongside civilian counterparts ensuring the seamless transition of over 8,000 Soldiers annually to their gaining units.

1st Sergeant Canada has deployed to Iraq in support of Operation Iraqi Freedom and to Kuwait. She was recognized as the 22nd Chemical Battalion’s Senior Non-Commissioned Officer of the Year and inducted into the prestigious Sergeant Audie Murphy Club, recognizing exceptional soldiers that go above and beyond to give back to the Army, Community, Soldiers and Family members.

Lastly, 1st Sergeant Canada has contributed to the community by volunteering at events such as the 2018 U.S. Senior Open, Colorado Springs Street Breakfast, Meal on Wheels, Iron Horse Park Clean and Green Day and was a judge for the Hampton Roads JROTC Drill Competition. 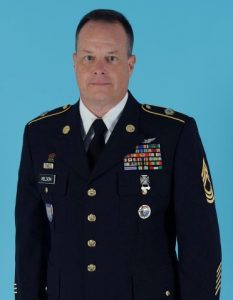 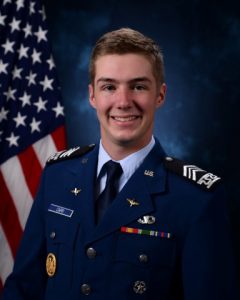 With a constant demand for medical support at all military training functions, Cadet Carr reviewed the cadet EMR process and spearheaded an ambulance ride-along program for cadet patients and cadet EMRs. This program allowed cadet EMRs to gain crucial reactionary medical knowledge and a continuity of care while supporting the Cadet Wing.

Finally, on two separate occasions during his off-duty time, Cadet Carr relied on his EMT/EMR training as a first responder at a pedestrian/vehicle accident. With his experiences responding to medical emergencies at the Air Force Academy, he rendered initial medical care and properly handed off the victim’s care to on-duty responders. During a second incident, he discovered an elderly woman who had fallen in the middle of the street and injured herself. Again, he relied on his training to stabilize the individual until medical help arrived. 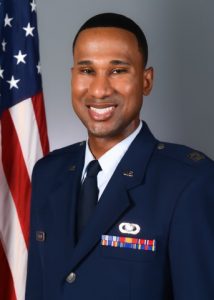 Captain Frank R. Jackson distinguished himself by meritorious service while assigned to the 460th Operations Support Squadron, 460th Operations Group, 460th Space Wing, Buckley Air Force Base, Colorado from 03 November 2018 to 18 October 2019. During this period, Captain Jackson oversaw two acquisition milestone review panels where he coordinated with 13 organizations and verified 21 key readiness requirements that led to the operational acceptance of three satellites worth 2.5 billion dollars. His operational expertise was key in leading the mission planning for 16 organizations, 265 military personnel, and 13 critical assets in support of the 32.2-billion-dollar Space Based Infrared Systems program achieving the Initial Operational Capability milestone after 23 years. Additionally, his superior accomplishments culminated in his recognition as the 2019 Company Grade Officer of the Quarter for the 460th Operations Support Squadron and his team garnering the 2019 Air Force-level Theodore Von Karman Award for outstanding contribution to national defense in the field of science and engineering.

Furthermore, Captain Jackson mentored an at-risk high school student by providing weekly tutoring in mathematics class for nine weeks which improved the student’s final grade to successfully pass the course. Moreover, he led a three-thousand-dollar home improvement project where he installed flooring and painted walls for a single mother of two kids. Finally, Captain Jackson coordinated with over 300 sponsors in a fundraising drive that resulted in 45 thousand dollars of college scholarship funds for 21 minority students in Colorado. In his role as a Joint Nuclear Command and Control Crew Non-Commissioned Officer, Petty Officer Fuller demonstrated his expertise in a stressed environment time and again by flawlessly decoding, preparing, and transmitting 240-time sensitive presidential directives to strategic forces. His actions proved essential in sustaining the Chairman of the Joint Chiefs of Staff’s number one priority no-fail mission.

Finally, Petty Officer Fuller’s quick thinking under pressure was clearly exhibited when he immediately took charge of a vehicular rollover accident on a Colorado Springs highway. Petty Officer Fuller administered lifesaving first aid to a victim who was ejected from her vehicle while also overseeing the extraction of a trapped child. Both mother and child survived the ordeal in a large part to the heroics of Petty Officer Fuller.